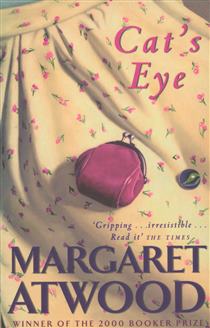 Cat’s Eye is a 1988 novel by Canadian writer Margaret Atwood about controversial painter Elaine Risley, who vividly reflects on her childhood and teenage years.
Her strongest memories are of Cordelia, who was the leader of a trio of girls who were both very cruel and very kind to her in ways that tint Elaine’s perceptions of relationships and her world — not to mention her art — into her middle years.
The novel unfolds in mid-20th century Canada, from World War II to the late 1980s, and includes a look at many of the cultural elements of that time period, including feminism and various modern art movements.
The book was a finalist for the 1988 Governor General’s Award and for the 1989 Booker Prize.