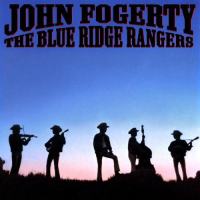 What happens when one American legend takes on 12 American classics? If that legend is John Fogerty, the simple answer is musical magic. On The Blue Ridge Rangers Rides Again, Fogerty reinvents such treasures as the Everly Bros.’ ˝When Will I Be Loved˝ (a stunning duet with fellow Rock & Roll Hall of Famer Bruce Springsteen), Rick Nelson’s ˝Garden Party˝ and John Denver’s ˝Back Home Again˝ with uncommon grace and unbridled zest.
As longtime Fogerty fans will recall, the Blue Ridge Rangers made their first appearance in 1973 when the Grammy® winner released an album of classic covers (including ˝Jambalaya˝ and ˝She Still Thinks I Care˝) under that moniker. The name was deceptive: the Rangers were Fogerty and Fogerty alone. He played all the instruments including drums.
The thought of revisiting the Blue Ridge Rangers as a vehicle to create another set of beloved covers has never been far from Fogerty’s mind. ˝I thought about it at least once a month,˝ he says. ˝I told myself if I ever get to do this again, I’m going to have real guys playing; I’d find the best guys I could and have fun and so that’s what happened this time.˝
Indeed, on The Blue Ridge Rangers Rides Again, Fogerty surrounds himself with such top-flight musicians as Buddy Miller (guitar), Greg Leisz (pedal and lap steel, mandolin and dobro), Jason Mowery (fiddle, mandolin and dobro) and Kenny Aronoff (drums). They circle and entwine each other in joyous musical call and responses (complete with hooting and hollering), weaving in and out of each song. Call it a country record if you must, but it’s really the sound of America. And the sound of Fogerty: real instruments, real talent. No artifice.
Fogerty, who arranged and produced the set, encouraged his fellow musicians to bring their own ideas to the songs. The album’s great live feel comes from the fact that the basic tracks were recorded in three or four takes over a seven-day period. Then, the players hung out in the studio during each other’s overdubs, egging on their compatriots. ˝It seemed to be a very rewarding way to make music,˝ Fogerty says. ˝I really believed in the songs and the vibe. There was not really a preconceived notion. There [was] an openness, but the thing has to ring true to how I feel.˝
Nowhere is that openness more evident than on 1964’s ˝Haunted House.˝ Fogerty & Co. take what many considered a novelty song made famous by Jumpin’ Gene Simmons about an alien and turn it into a full-on rave-up. ˝It was my idea that I wanted it to basically be a country jam,˝ he says. ˝It was a vehicle to have the musicians trade verses. This was important to me; to hear that fun.˝
And therein lies another key to the album’s unforced grace. When recording cover songs, it may be tempting to labor over whether to remain faithful to the original or to morph the song into a new creation, Fogerty discarded any such worries and simply went with his gut. ˝If when I get done with a particular song and I don’t have any more questions, I’m pretty sure it’s done,˝ he plainly says.
While it may seem odd this member of the Songwriters Hall of Fame and author of such iconic tunes as ˝Proud Mary,˝ ˝Bad Moon Rising,˝ ˝Born on the Bayou,˝ ˝Fortunate Son˝ and ˝Who’ll Stop the Rain,˝ would turn to tunes penned by others, remember that he is also a great lover of music. (The lone Fogerty composition on the set is the swampy ˝Change in the Weather,˝ originally on 1986’s Eye of the Zombie.)
Many of the songs have been Fogerty favorites for decades and have, as he puts it, ˝become part of my DNA.˝ Some selections, such as ˝When Will I Be Loved˝ and ˝Moody River,˝ go back to his adolescence. Many, such as John Prine’s ˝Paradise˝ and John Denver’s ˝Back Home Again,˝ are from revered contemporaries. ˝I Don’t Care (Just As Long As You Love Me)˝ is a salute to one of his musical heroes, Buck Owens, and his groundbreaking guitarist and Buckaroos’ leader Don Rich.
Others were last minute additions. Miller brought ˝Fallin

I Don’t Care (Just As Long Ay You Love Me)

I’ll Be There (If Ever You Want Me)

Change In the Weather

Heaven’s Just a Sin Away

When Will I Be Loved