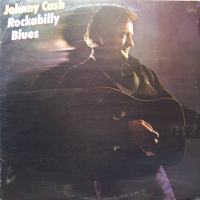 Rockabilly Blues is an album by American country singer Johnny Cash, released on Columbia Records in 1980
It is a collection of songs in the rockabilly style.
Highlights include ˝Cold Lonesome Morning,˝ which had some minor chart success (No. 53 in the country charts), ˝Without Love,˝ by his son-in-law, Nick Lowe, and a cover of the witty ˝The Twentieth Century is Almost Over.˝
The first two of the aforementioned songs were the only singles from the album, though ˝Without Love˝ hardly enjoyed any chart success, peaking at No. 78. ˝The Twentieth Century is Almost Over˝ was re-recorded five years later by Cash and Waylon Jennings,
Willie Nelson and Kris Kristofferson, collectively known as The Highwaymen, on their first album entitled Highwayman, though it was, in essence, a duet with Nelson.
(Izvor: Wikipedia)

It Ain’t Nothing New Babe

The Cowboy Who Started The Fight