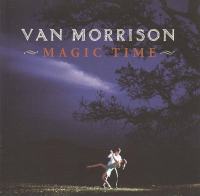 Finally, Van is back to doing what he does best. Easily his best CD in a decade, from the opening melody of ˝Stranded˝ through to ˝Carry On Regardless,˝ Morrison is more in his own skin than he has been for years.
On yet another record label, he has jettisoned most of his homages to old R&B singers, walked away from silly partnerships, and found his way back to that Irish world of melody.
Perhaps not entirely enveloped by the mystic, these songs nonetheless ring with an authenticity that has been largely absent in all of his 21st century work.
There is still his nagging whining about how hard he has it in the record business.
Someone needs to write to him and tell him no one really cares. It certainly hasn’t impacted his property value in the south of Dublin, whose wonderful coastline is beautifully photographed in the wee booklet. Maybe it’s just a function of being from Belfast. Anyway...
Speaking of Ireland, ˝Celtic New Year˝ is the kind of tune you’ve been waiting for him to write for years.
It would be equally at home on any of his late 80’s- early 90’s CDs. You can easily imagine this fine song following ˝Orangefield˝. ˝Keep Mediocrity at Bay˝ is a blues romp that falls squarely in with his avocation for all things Hooker, and his harp solo is reminiscent of the work he did on John Lee’s recent DVD.
So too with ˝Evening Train.˝ It’s the kind of song that rocks with a bluesy funk that’s just about perfect.
The musicianship on this CD is spot on throughout. Like some of the best CDs of the seventies and his work with Georgie Fame as bandleader, Morrison has assembled a band that knows just what a song needs and nothing more. Because of the quality of the songs, Morrison’s romp through these numbers is far less contrived than it has been on the past 5 or 6 discs. Even his takes on Sinatra’s ˝This Love of Mine˝ and Perry Como’s (imagine...) ˝I’m Confessin’˝ are the real deal. Recalling his quip about Rod Stewart’s take on ˝Have I Told You,˝ ˝Thanks for makin’ a lucky man feel very old,˝ Van instead does the tunes rightly.
So when he gets to ˝Just Like Greta,˝ there is such aheartfelt sincerity to his dismay that this becomes one of the lyrical standouts that will replay for you many times.
While garbo just disappeared, Morrison growls in exitential despair. ˝Gypsy in My Soul,˝ also rings with an authority that reminds you how strongly he can capture a certain human restlessness, much as Lightfoot, Eric Andersen or Robbie Robertson.
˝Lonely and Blue˝ is a melancholic ballad well suited for late night.
Although it comes perilously close to lounge music, the restraint of the musicians rescue the song from, well, mediocrity. ˝The Lion This Time˝ is an abstract tale that would have fit in perfectly with VEEDON FLEECE or HARD NOSE THE HIGHWAY.
˝Magic Time˝ is one of the great romantic Morrison songs, though filled with a settled wisdom that age brings.
˝They Sold Me Out˝ is the usual screed from the Belfast crank and could have been left off. It just is completely impossible to identify with his grousing. He should carry on regardless. All in all, a very well crafted CD, finally. A classic? close enough. Maybe there is another NO GURU or CELTIC HEARTBEAT or AVALON SUNSET still in him.
This is the first solid hopeful indication in a very long time that such inspiration still infuses his Irish soul.

This Love Of Mine

Gypsy In My Soul

The Lion This Time

They Sold Me Out