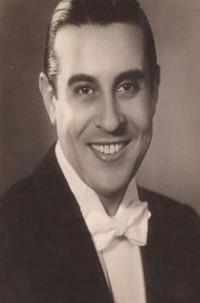 Alberto Rabagliati was born in Milan in 1906 and was the son of piedmontese spouses: her father Leandro Valentino Rabagliati and his mother Delfina Besso were both natives of Casorzo, a common on the hills of the Montferrat in the Province of Asti (Italy).
In 1927, he moved to Hollywood as the winner of a Rudolph Valentino look-alike contest.
He later recalled: ĮFor someone like me, who had seen no more than Lake Como or Monza Cathedral so far, finding myself on board a luxury steamer with three cases full of clothes, a few rolls of dollars, gran-duchesses and countesses flirting with me was something extraordinaryĮ.
He remained four years in America, but his career as an actor never took off.
During his stay he had however the opportunity to get to know new musical genres such as jazz, swing, and scat singing.