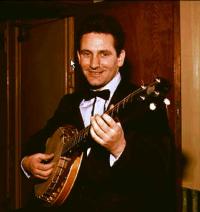 Lonnie Donegan MBE (29 April 1931 – 3 November 2002) was a skiffle musician, with more than 20 UK Top 30 hits to his name. He is known as the ˝King of Skiffle˝ and is often cited as a large influence on the generation of British musicians who became famous in the 1960s.
The Guinness Book of British Hit Singles & Albums states Donegan was ˝Britain’s most successful and influential recording artist before The Beatles.
He chalked up 24 successive Top 30 hits, and was the first UK male to score two U.S. Top 10s˝.

Born as Anthony James Donegan in Bridgeton, Glasgow, Scotland, the son of a professional violinist who had played with the Scottish National Orchestra, he moved with his family in 1933 to East Ham, east London.
Donegan was evacuated to Cheshire to escape the Blitz in World War II, and he attended St Ambrose College, initially at the school’s original site in Dunham Road, Altrincham.
In the early 1940s he mostly listened to swing jazz and vocal acts, and became interested in the guitar.
Country & western and blues records, particularly by Frank Crumit and Josh White, attracted his interest and he bought his first guitar at the age of fourteen in 1945.
From listening to BBC radio broadcasts in the following years he began learning songs such as ˝Frankie and Johnny˝, ˝Puttin’ On the Style˝, and ˝The House of the Rising Sun˝.
By the end of the 1940s he was playing guitar around London and visiting small jazz clubs.

The first band he played in was the trad jazz band led by Chris Barber, who approached him on a train asking him if he wanted to audition for his band.
Barber had heard that Donegan was a good banjo player; in fact, Donegan had never played the banjo at this point, but he bought one and tried to bluff his way through the audition.
More on personality than playing, he was brought into Barber’s band.
His stint with the band was interrupted when he was called up for National Service in 1949, but his military service in Vienna gave him contact with American troops, and access to records as well as the opportunity to listen to the American Forces Network radio station.

In 1952 he formed his first group, the Tony Donegan Jazzband, which found some work around London.
On one occasion they opened for the blues musician Lonnie Johnson at the Royal Festival Hall.
Donegan was a fan of Johnson, and took his first name as a tribute to him.
The story goes that the host at the concert got the musicians’ names confused, calling them ˝Tony Johnson˝ and ˝Lonnie Donegan˝, and Donegan was happy to keep the name.

In 1953 cornetist Ken Colyer, enjoying hero status for having spent time in a New Orleans jail (due to a visa problem), returned to England and, when invited to play with Chris Barber’s band, became a moving figure within it. With the new name, Ken Colyer’s Jazzmen, the group, with Donegan, made its initial public appearance on 11 April 1953 in Copenhagen.
The following day, Chris Albertson recorded the group (as well as a Monty Sunshine Trio, with Donegan and Barber) for Storyville Records. These were Donegan’s first commercially released recordings.

Donegan married three times.
He had two daughters by his first wife, Maureen Tyler (divorced 1962), a son and a daughter by his second wife, Jill Westlake (divorced 1971), and three sons by his third wife, Sharon, whom he married in 1977.
He was the second cousin three times removed of the Scottish Gaelic Footballer, Chris Pendergast.

Lonnie Donegan died in 2002, aged 71, after suffering a heart attack in Market Deeping mid-way through a UK tour and shortly before he was due to perform at a memorial concert for George Harrison with The Rolling Stones.
He had suffered from cardiac problems since the 1970s and had several heart attacks in his last years. 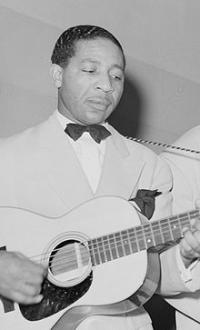 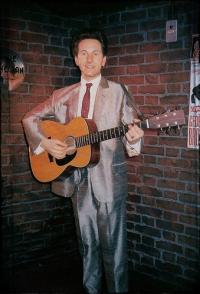 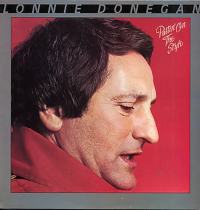