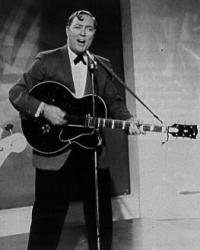 Bill Haley ( July 6, 1925 – February 9, 1981) was one of the first American rock and roll musicians.
He is credited by many with first popularizing this form of music in the early 1950s with his group Bill Haley & His Comets and their hit song ˝Rock Around the Clock˝.

Bill Haley was born in Highland Park, Michigan.
Because of the effects of the Great Depression on the Detroit area, his father moved the family to Boothwyn, Pennsylvania, near the town of Chester, when Bill was seven years old.
Haley’s father played the banjo, and his mother was a technically accomplished keyboardist with classical training.
Haley told the story that when he made a simulated guitar out of cardboard, his parents bought him a real one.

The anonymous sleeve notes accompanying the 1956 Decca album ˝Rock Around The Clock˝ describe Haley’s early life and career thus: ˝Bill got his first professional job at the age of 13, playing and entertaining at an auction for the fee of $1 a night.
Very soon after this he formed a group of equally enthusiastic youngsters and managed to get quite a few local bookings for his band.˝

The sleeve notes continue: ˝When Bill Haley was fifteen [c.1940] he left home with his guitar and very little else and set out on the hard road to fame and fortune.
The next few years, continuing this story in a fairy-tale manner, were hard and poverty stricken, but cramful of useful experience.
Apart from learning how to exist on one meal a day and other artistic exercises, he worked at an open-air park show, sang and yodelled with any band that would have him and worked with a traveling medicine show.
Eventually he got a job with a popular group known as the ˝Down Homers˝ while they were in Hartford, Connecticut.
Soon after this he decided, as all successful people must decide at some time or another, to be his own boss again - and he has been that ever since.’
[Note: these notes fail to account for his early band, known as the Four Aces of Western Swing.
They later changed their name to avoid confusion with the pop vocal group the Four Aces.
During the 1940s Haley was considered one of the top cowboy yodelers in America.

The sleeve notes conclude: ˝For six years Bill Haley was a musical director of Radio Station WPWA in Chester, Pennsylvania, and led his own band all through this period.
It was then known as Bill Haley’s Saddlemen, indicating their definite leaning toward the tough Western style.
They continued playing in clubs as well as over the radio around Philadelphia, and in 1951 made their first recordings.˝

A self-admitted alcoholic (as indicated in a 1974 radio interview for the BBC), Haley fought a battle with alcohol into the 1970s.
Nonetheless, he and his band continued to be a popular touring act, enjoying a career resurgence in the late 1960s with the Rock and roll revival movement and the signing of a lucrative record deal with the European Sonet Records label.
After performing for Queen Elizabeth II at a command performance in 1979, Haley made his final performances in South Africa in May and June 1980.
Prior to the South African tour, he was diagnosed with a brain tumor, and a planned tour of Germany in the fall of 1980 was canceled.
......
Despite his ill health, Haley began compiling notes for possible use as a basis for either a biographical film based on his life, or a published autobiography (accounts differ), and there were plans for him to record an album in Memphis, Tennessee, when the brain tumor began affecting his behavior and he went back to his home in Harlingen, Texas, where he died early in the morning of February 9, 1981. 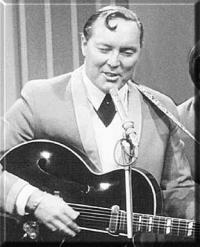 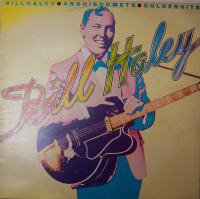 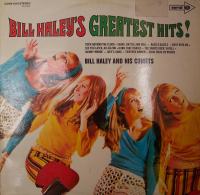 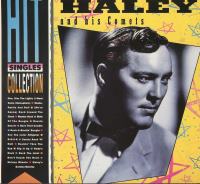