Born and educated in Copenhagen, he became a schoolmaster, and ultimately in 1883 a professor at the University of Copenhagen.
He was strongly influenced by Soren Kierkegaard in his early development, but later became a positivist, retaining and combining with it the spirit and method of practical psychology and the critical school.
The physicist Niels Bohr studied philosophy from and became a friend of Hoffding.

His best-known work is perhaps his Den nyere Filosofis Historie (1894), translated into English from the German edition (1895) by B.E. Meyer as History of Modern Philosophy (2 vols., 1900), a work intended by him to supplement and correct that of Hans Brochner, to whom it is dedicated.
His Psychology, the Problems of Philosophy (1905) and Philosophy of Religion (1906) also have appeared in English. 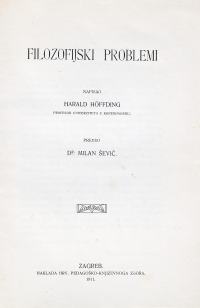