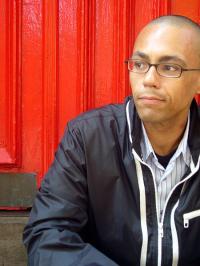 Victor LaValle (born February 3, 1972) is an American author who was raised in the Flushing and Rosedale neighborhoods of Queens, New York.
He is the author of a short-story collection, Slapboxing with Jesus and two novels, The Ecstatic and Big Machine.
LaValle writes fiction primarily, though he has also written essays and book reviews for GQ, Essence Magazine, The Fader, and The Washington Post, among others.

Slapboxing with Jesus was published in 1999 by Vintage Books.
The eleven interconnected stories deal mostly with the lives of young black and Latino men living in New York in the 1970s and 1980s.
The collection went on to receive wide critical praise. It won the author a PEN/Open Book Award and the Key to Jamaica, Queens.

The Ecstatic was published in 2002 by Crown Publishing Group.
The novel continues the story of Anthony James, a character from LaValle’s collection of stories. Anthony is a morbidly obese college dropout who may also be experiencing the first signs of schizophrenia.
The novel follows the exploits of his family, who are trying their best to save Anthony, but who might be in need of a little saving themselves.
The subject matter is dark, and even shocking, but a gallows humor runs throughout.
This book received even wider critical acclaim, earning comparisons to writers such as Ken Kesey, Chester Himes, and John Kennedy Toole.
In 2003 the novel was a finalist for both the PEN/Faulkner Award for Fiction and the Hurston-Wright Legacy Award.

Big Machine was published in 2009 by Spiegel & Grau.
The novel tells the story of Ricky Rice, an ex-junkie survivor of a suicide cult whose life is changed when a mysterious letter arrives summoning him to a remote compound in Vermont.
The novel was widely praised upon its release, making many national top ten lists.
It also won the Shirley Jackson Award for Best Novel in 2009, as well as the Ernest J. Gaines Award for Literary Excellence and an American Book Award in 2010.

LaValle graduated with a degree in English from Cornell University and a Master of Fine Arts Program of Creative Writing at Columbia University.

LaValle is an Assistant Professor at the Columbia University School of the Arts.
He lives in New York with his wife, novelist Emily Raboteau. 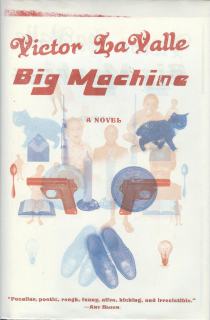