Virginia Sapiro is Dean of Arts & Sciences and Professor of Political Science.
Before her arrival at BU in 2007, she spent 31 years on the faculty of the University of Wisconsin–Madison, where she held the distinguished Sophonisba P.Breckinridge Professorship of Political Science and Women’s Studies.
She also chaired the Department of Political Science and the Women’s Studies Program and held many leadership positions, including interim provost and vice chancellor for academic affairs, and vice provost for teaching and learning.
She has also served on the Board of Trustees of Clark University.

Sapiro is a member of the American Academy of Arts and Sciences and the recipient of many other honors and awards, including a distinguished professorship, the University of Wisconsin Hilldale Award in the Social Sciences for excellence in teaching, research, and service (2000), the first annual University of Wisconsin award for Outstanding First-Year Student Advocate (2006), and awards for mentoring.

She has served in many leadership capacities in professional organizations, including Secretary and Vice President of the American Political Science Association (APSA), founding President of the APSA Organized Section on Women and Politics Research, and President of the APSA Organized Section on Elections, Public Opinion, and Voting Behavior.
She has been on the Executive Councils of the Midwest Political Science Association and the International Society for Political Psychology, as well as on the editorial boards of 10 different scholarly journals.

Sapiro has published widely in the areas of political psychology, political behavior and public opinion, elections, gender politics, American political development, and feminist and democratic theory.
Her first book, The Political Integration of Women: Roles, Socialization, and Politics (1983) is a classic in survey-based research on gender and adult political socialization.
A Vindication of Political Virtue: The Political Theory of Mary Wollstonecraft (1992), a study of the 18th century democratic theorist, won the APSA’s Victoria Schuck Award for best book on women and politics.
From 1997-2000 she served as Principal Investigator for the American National Election Studies.

Sapiro earned an MA and PhD in political science from the University of Michigan and a BA in government from Clark University, where she was elected to Phi Beta Kappa. 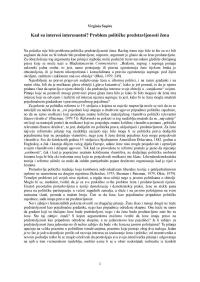