Okin became the Marta Sutton Weeks Professor of Ethics in Society at Stanford University in 1990.

Okin held a visiting professorship at Harvard University’s Radcliffe Institute for Advanced Study at the time of her death on March 3rd 2004.

In 1979 she published Women in Western Political Thought, in which she details the history of the perceptions of women in western political philosophy.

Her 1989 book Justice, Gender, and the Family is a critique of modern theories of justice.
These theories include the liberalism of John Rawls, the libertarianism of Robert Nozick, and the communitarianism of Alasdair MacIntyre and Michael Walzer.
According to Okin, these theorists write from a male perspective that wrongly assumes that the institution of the family is just.
She believes that the family perpetuates gender inequalities throughout all of society, particularly because children acquire their values and ideas in the family’s sexist setting, then grow up to enact these ideas as adults.
If a theory of justice is to be complete, Okin asserts that it must include women and it must address the gender inequalities she believes are prevalent in modern-day families.

In her 1999 essay, later expanded into an anthology, ˝Is Multiculturalism Bad for Women?˝ Okin argues that a concern for the preservation of cultural diversity should not overshadow the discriminatory nature of gender roles in many traditional minority cultures, that, at the very least, ˝culture˝ should not be used as an excuse for rolling back the women’s rights movement. 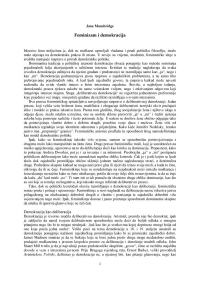