The crimson petal and the white 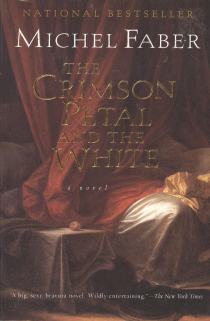 Although it’s billed as ½the first great 19th-century novel of the 21st century,½ The Crimson Petal and the White is anything but Victorian. The story of a well-read London prostitute named Sugar, who spends her free hours composing a violent, pornographic screed against men, Michel Faber’s dazzling second novel dares to go where George Eliot’s The Mill on the Floss and the works of Charles Dickens could not. We learn about the positions and orifices that Sugar and her clients favor, about her lingering skin condition, and about the suspect ingredients of her prophylactic douches. Still, Sugar believes she can make a better life for herself. When she is taken up by a wealthy man, the perfumer William Rackham, her wings are clipped, and she must balance financial security against the obvious servitude of her position. The physical risks and hardships of Sugar’s life (and the even harder ½honest½ life she would have led as a factory worker) contrast--yet not entirely--with the medical mistreatment of her benefactor’s wife, Agnes, and beautifully underscore Faber’s emphasis on class and sexual politics. In theme and treatment, this is a novel that Virginia Woolf might have written, had she been born 70 years later. The language, however, is Faber’s own--brisk and elastic--and, after an awkward opening, the plethora of detail he offers (costume, food, manners, cheap stage performances, the London streets) slides effortlessly into his forward-moving sentences. When Agnes goes mad, for instance, ½she sings on and on, while the house is discreetly dusted all around her and, in the concealed and subterranean kitchen, a naked duck, limp and faintly steaming, spreads its pimpled legs on a draining board.½ Despite its 800-plus pages, The Crimson Petal and the White turns out to be a quick read, since it is truly impossible to put down.