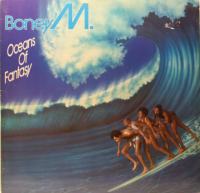 After the enormeous success of Boney M.’s third album ˝Nightflight To Venus˝ that spent 65 weeks on the UK charts, expectations were sky high to Boney M.’s fourth LP, and the release would also be postponed several times until finally seeing the light of day in September 1979.
The group was also starting to have serious problems within, Marcia Barrett claimed that they were being paid far too little, and dancer Bobby Farrell was threatening to leave if producer Frank Farian didn’t allow him to sing for real on the records (Farian had done all the male vocals in the studio himself whereas Bobby Farrell would only sing for real in their live concerts).
Furthermore, the lead singer of one of Farian’s other groups Eruption, Precious Wilson, had left the group, now wanting to go solo, and although Farian offered her to take dancer (but not singer) Maizie Williams’ place in Boney M., she declined.
Precious Wilson would, however, be featured as a Special Guest Star on the opening track of the new album, the pounding disco-rock-stomper ˝Let It All Be Music˝ with solo parts by Farian, Boney M. singers Liz Mitchell & Marcia Barrett, and a goosebumping finale with Precious Wilson crying out on top of her lungs.
Stellar! Right on to ˝Gotta Go Home˝ which was the flagship single with ˝El Lute˝ as a double A-side, another frenetic disco track with oil drums as a hint to Boney M.’s Caribbean roots.
Mastermind Frank Farian would, due to his anger about Bobby Farrell’s threats, show off on this L.P. that the vocals of Boney M. were only done by himself, Liz Mitchell, and Marcia Barrett (The original L.P. even features track-by-track vocal credits), thus he would duet with himself on ˝Bye Bye Bluebird˝, a tight, funky disco track with flute and sax solos, and singing with his incredible falsetto voice as well as his deep male voice.
(Izvor: Amazon.com)