Peacock cries [at the Three Gorges] 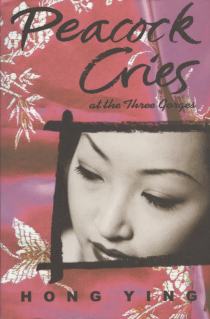 Hong Ying surpasses her previous novel, K: The Art of Love, with a novel of heightened political and sexual -tension set around the Three Gorges Dam on the Yangtze River. The largest construction project in the history of China, the dam opens in June 2004. Its controversial -reservoir will cut the famous Gorge to one third of its height and submerge the whole area, the cradle of Chinese civilization for three millennia.

When Beijing scientist Liu goes to visit her husband, the director of the dam project, she discovers he is being unfaithful and flees to her hometown. Taking refuge with her Auntie Chen, Liu is told by Chen how her mother gave birth to her in the midst of political turmoil and how both mother and daughter nearly died for lack of help. Chen’s own son, Yueming, was born at the same time as Liu and is now a painter and key figure in a local cult bent on sabotaging the dam’s construction. Finding themselves drawn together, Liu and Yueming realize they are a reincarnation of the prostitute Red Lotus and a Buddhist priest, whose affair led to their vilification and whose naked crucifixion is described in graphic sexual detail. With the souls of Red Lotus and the priest cementing the couple’s attachment, Liu’s decision to join Yueming in protesting against the dam means she must ultimately face imprisonment.

Peacock Cries boldly tackles the subjects of rein-carnation and spiritual quest in the face of economic development.

Hong Ying was born in Chingqing in 1962 into a sailor’s family. She was the sixth child in a family of eight and endured great poverty and hunger as a child during the Great Famine and the Cultural Revolution.