How to Make The Radio Broadcast Knock-Out Four-Tube Roberts Receivers : A Complete Description 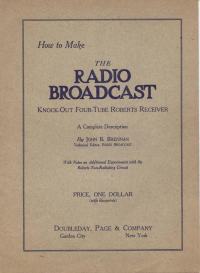 IT IS not likely that we will ever be satisfied with any particular type of receiver.
As time goes on, and our knowledge of radio circuits increases, long tlistance reception with simple receiving devices which use small batteries and a very small tube, perhaps will be quite general. However, if we stand by anil wait for such a receiver to be
developed, we will be cheating ourselves of much enjoyment that may now be had very easily and very cheaply.
The receiver described in this booklet and in the blue prints that accompany it, is the greatest receiver for home construction that we have ever seen - and we’ve seen and operated almost every type made and used during the last twelve years.

Walter Van B. Roberts, who designed the two-tube reflex half of the circuit, is in our estimation, one of America’s most practical radio men.
He has a peculiar knack of being able to make practise conform to his theory, rather than make theory conform to a present development.
His two-tube receiver is undoubtedly the most notable advance in receivers for home construction since the development of regeneration by Armstrong.

E HEAR an occasional remark from some of the Radio Wise that the Roberts circuit is not new because it is merely tuned radio frequency of the neutralized type, regeneration of the non-radiating type, and common audio amplification by the well Known reflex method. This Statement is partially true. Roberts does employ all these ystems, but he does more than that.
He has succeeded in welding them into a unit that is easily controlled, built, and operated.
This is the accomplishment we claim for him.
The receiver proiluces startling results.

To this truly remarkable circuit, Mr. Brennan has added a push-pull amplifier.
The four-tube receiver thus developed is capable of reproducing extremely loud and clear music anil speech.
It is easy to operate, capable of bringing in stations over extremely long distances.
Added to this, it is highly selective and most economical.

PERHAPS the Radio Broadcast Four-Tube Knock-Out Receiver is not the ideal * receiver, but we have heard it pull in forty-six stations on a loud speaker with two tubes, using an indoor antenna.
On a short antenna, using four tubes in one of the receivers of this model built by Mr. Brennan. we hate blasted the diaphragm of a good loud speaker.
When we found a speaker which could carry the output of this set, its signals were heard for more than a quarter of a mile.
If you know of a receiver capable of any better performance, let us know about it. and it will not he long before you will
find it described in the pages of Radio Broadcast.
Until then, we believe our four-Tube Knock-Out is, as we said before, the best four-tube receiver for home construction ever produced.
It is not merely the best, but it is the best by a very good margin indeed.