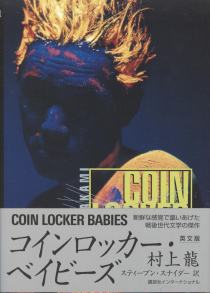 The third of this prolific Japanese authors 30 novels to appear in English, this is a cyber-Bildungsroman of playful breadth and uncertain depth. Two mothers abandon their infant boys in the Yokohama train stations coin lockers. The reader is not spared the mechanics of packaging a child in a parcel, nor the grim details of any of the other episodes of discomfort and suffering which follow in incremental doses, though always with such whimsy that the reader wonders whether or not to be offended. The heroes, Kiku and Hashi, grow up together; but, beyond their bizarre beginnings, they couldnt be more different. Kiku becomes a homicidal pole-vaulter whose inner rage gives him unusual speed and strength, but which also fosters an obsession with murder and a secret drug that sets any creature into a killing frenzy. The more delicate Hashi strives to find his mother, supporting himself as a prostitute in Toxitown?a chemical disaster zone insulated from Tokyo by a wall and armed guards?until one of his johns discovers his musical talent and makes him a star. The settings seem lifted from Japanese animation epics: an abandoned mining town, an underwater tunnel and a retreat in the mountains. At times, Murakami rambles, as in the case of a taxi drivers pointless monologue or the long interviews with women who might be Hashis mother. Such digressions, however, are less the product of careless craft than of a lush and frantic imagination overwhelming its own project. Though expansive and exciting as its scope, the novel is as unfocused as its troubled heroes.