T Wish You A Merry Christmas 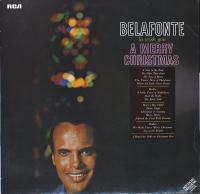 The songs of Christmas are such a familiar part of the Yuletide season that we are often indined to assume that they were always present, sung just as we sing them now.
Many of them have actually been part of this heart-opening holiday for hundreds of years, others have joined the select company more recently.
But in almost every case the carols, the hymns, the songs of cheer arid well-being have only gradually acquired the form and intepretation to which we are accustomed.
Like ali songs that are close to the hearts and souls of the people of the world, our Christmas songs have come down to us through a long period of acclimating growth and development, honed by the subtle influences of generations of singers.
Every creative singer brings to these songs a bit of himself, adding one more expressive shading to their slow, painstaking evolution.
The deep under-standing and the fresh, clear meaning with which Harry Belafonte has given vivid new life to folk songs from ali corners of the world, he now applies to these most universal of folk songs.
He has brought to this program of Christmas songs the same searching curiosity that has made his repertoire of other types of songs unique.
He mingles the warmly familiar (Silent Night; God Rest Ye Merry, Gentlemen; Christmas Is Coming) with less widely known treasures-the appealing Where the Little Jesus Sleeps and the compelling A Star in the East, for instance.
Mary’s Boy Child. previously unknown, has already become immensely popular in England and has taken its place with the standard Christmas songs.
He moves well off the beaten track to bring us that memorable poem by^ Henry Wadsworth Longfellow, / Heard the Bells on Christmas Day, in a striking’ musical setting.
And if the tune of Jehovah the Lord Will Provide sends a wry smile flickering across the lips of those who remember that it also served as the melody of a topical song of that day, inelegantly titled Hallelujah, I’m a Bum.
Through it ali there is a deep spirit of reverence, a spirit of good cheer and good will, and that feeling of closeness and mutuality that is the essence of Christmastime.
As every Belafonte follower knows, he moves easily and vividly from boisterousness to tenderncss, from merriment to soul-searching.
At those qualities are in these Christmas songs, plus one other inimitable quality-the vibrant. moving, unforgettable voice and style of Harry Belafonte.
(Watson Willie)

A Star in the East

The Gifts They Gave

The Son of Mary

The Twelve Days of Christmas

Where the Little Jesus Sleeps

Jehovah the Lord Will Provide

Medley: We Wish You a Merry Christmsa, Joy to the World

I Heard the Bells on Christmas Day