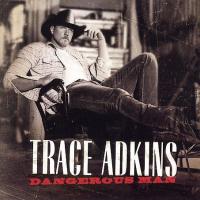 Personnel: Mike Brignardello, Pat Buchanan, Paul Franklin, Aubrey Haynie, Wes Hightower, J.T. Corenflos, Bryan Sutton. Recording information: 2006. Over the course of seven albums, Trace Adkins mined a musical territory between new traditionalism and contemporary commercial country. 2006’s DANGEROUS MAN finds him leaning toward the latter part of that equation, with no loss of his down-home, 10-gallon bite. The album’s lead-off single, ˝Swing,˝ is a case in point. Fueled by boogie-rock electric guitar, a thumping backbeat, and sing-along choruses, the tune is glossy and anthemic, owing more to Lynyrd Skynyrd than to Hank Williams. When not flexing his rock muscles, Adkins shows his skill with emotive, mid-tempo balladry (˝Words Get in the Way˝) designed to fit seamlessly on MTV playlists. But where Adkins’s music leaves tradition behind for the mainstream, its country heart beats in the right place: baseball, patriotism, and good-ol’-boy pastimes like drinking, driving, and loving are the themes on hand. Adkins also has a way with an infectious hook, and he carries these beautifully with his resonant baritone. Fans of Adkins, and of contemporary country in general, won’t be disappointed with DANGEROUS MAN.

I Came Here To Live

I Wanna Feel Something

Words Get In The Way