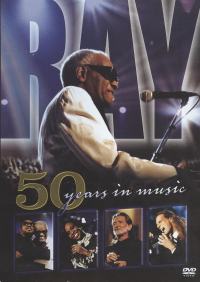 It’s possible, likely even, that Ray Charles put on a few poor or at least perfunctory performances in his career, but 50 Years in Music isn’t one of them. Combined with his sheer talent, the man’s natural ebullience and joy at playing music were enough to transcend the restrictions of any given scene--in this case, an antiseptic concert hall filled with a glamorous crowd barely visible beyond the footlights.
In fact, if there’s any significant drawback to this 90-minute show, recorded in 1991 in Pasadena, California, it’s that there isn’t enough Ray. Days before his 60th birthday, he showed up to deliver versions of a few of his standards (˝What’d I Say,˝ ˝Busted,˝ ˝Georgia On My Mind,˝ ˝America the Beautiful˝), along with some less usual fare (the country-tinged ˝Just for a Thrill,˝ the bluesy ˝Can’t Keep a Good Man Down˝), imbuing every tune with a freshness one might have thought impossible, given how many times he’d performed them. But there’s a lengthy mid-show stretch when Charles isn’t even onstage, and classics like ˝Your Cheatin’ Heart,˝ ˝I Can’t Stop Loving You˝ and ˝I Got a Woman˝ are performed by Randy Travis, James Ingram, and Michael McDonald respectively; good singers all, but not in a league with Brother Ray. Meanwhile, three duets yield mixed results: Ray and Stevie Wonder mesh superbly on ˝Livin’ for the City˝ and Willie Nelson relaxes with the star on ˝Busted,˝ but the egregious Michael Bolton damn near ruins ˝Georgia˝ with his ear-shattering, over-the-top emoting.
And the presence of Tevin Campbell (a young Quincy Jones protégé who comes on like a more wholesome version of Michael Jackson) and Brit band the Brand New Heavies, neither of whom performs a song that has anything to do with Ray Charles, is merely baffling. 50 Years in Music is just fine as tributes go, but as the late attorney Johnnie Cochran might have put it, ˝If you’ve got Ray, let him play.˝

Hallelujah, I Love Her So

Livin’ For The City

Georgia On My Mind

I Can’t Stop Loving You

I Got A Woman

Just Ask Me To

Just For A Thrill

I Wish I’d Never Loved You At All

Can’t Keep A Good Man Down

Ray Charles, Stevie Wonder and Everyone
2005