A Fatherís Legacy to his Daughters 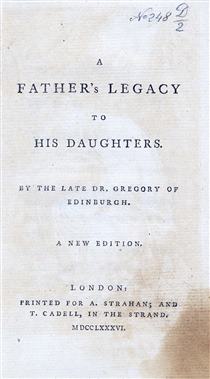 prejudices, to customs, to fashionable opinions.
Paternal love, paternal care, speak their ^genuine sentiments, undisguised and unrestrained.
A fatherís zeal for his daughterís improvement, in whatever can make a woman amiable, with a fatherís quick apprehension of the dangers that too often arise, even from the attainment of that very point, suggest his admonitions, and render him attentive to a thousand little graces^ and little decorums, which would escape the nicest moralist who should undertake the subject on uninterested speculation.
Every faculty is on the alarm, when the objects of such tender affection are concerned.

The Editor is encouraged to offer this Treatise to the Public, by the very favourable reception which the rest of his fatherís works have met with.
The Comparative View of the estate of Man and other Animals, and the Essay on the Office and Duties of a Physician, have been very generally read ; and, if he is not deceived by the partiality of his friends, he has reason to believe they have met with general approbation.

In some of those tracts the Authorís object was to improve the taste and understanding of his reader; in others, to mend his heart; in others, to point out to him the proper use of philosophy, by shewing its application to the duties of common life.
In all his writings his chief view was the good of his fellow-creatures ; and as those among his friends, in whose taste and judgment he most consisted, think the publication of this small work will contribute to that general design, and at the fame time do honour to his memory, the Editor can no longer hesitate to comply with their advice in communicating it to the Public.