Slapstick or lonesome no more 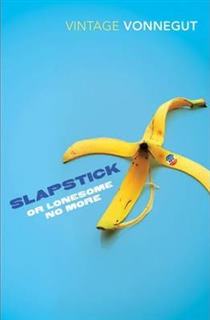 The novel was published in 1976 and is a bizarre meditation on the nature of the closeness Vonnegut had with his sister Alice, who died of cancer in 1958.
AliceÆs husband had died in a train accident two days before her death.
Vonnegut adopted and raised her children.
The novel was written shortly after the death of the authorÆs uncle.
In it, Vonnegut and his sister transform into the Swains (ĮNeanderthaloidĮ dizygotic twins).
When minds of both twins were combined together they formed a genius, a beautiful Swan (hence, Swain twins).
The twins felt that they become the ugly duckling as separated individuals.
When self-assessing his own work, Vonnegut graded Slapstick as D. Written in an almost free associative style, the book lacks the structural intricacies of VonnegutÆs earlier works.